Dear Supreme Court: Shouldn’t the ERA Be Next? 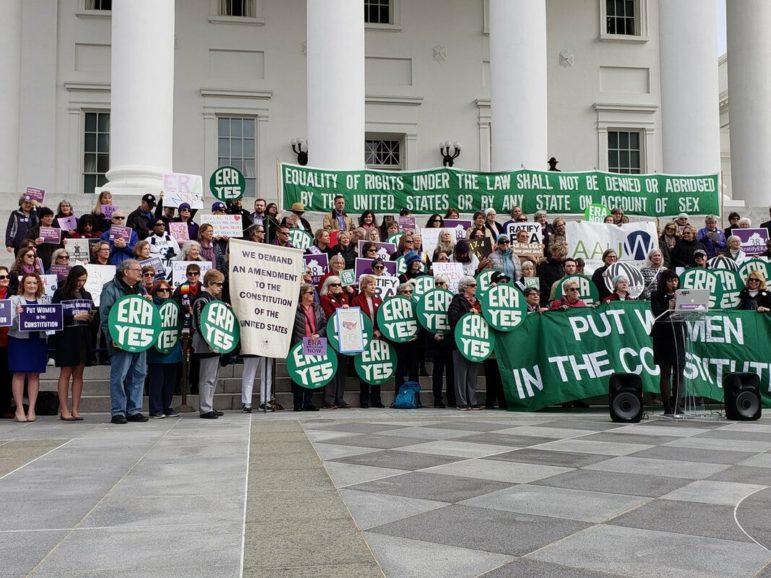 In the three minutes before she clicked onto our phone call, Carol Jenkins heard the breaking news: “The Supreme Court decision is out.”

It was an incredible week for social justice. That day, June 15, the Supreme Court ruled that LGBTQ and transgender workers were protected from workplace discrimination.  Simultaneously, hundreds of thousands of people around the country marched through the streets, protesting against racism and police brutality in the wake of George Floyd’s murder. The energy was ineffable. But something was missing.

“Everything was happening,” said Jenkins, co-president and CEO of the ERA Coalition and Fund for Women’s Equality. “We were sending out congratulatory messages. Black and brown people count now! The Supreme Court said LGBTQ people counted now! And then we [at the coalition] looked at each other and said, ‘When exactly will women count?’ We — and Black women especially — are still at the bottom of consideration.”

Unequal pay and lower paying jobs, unpaid labor at home, workplace discrimination, no equal protection in court —  women’s disparity has been a long-raging issue. And as the Coronavirus pandemic sweeps the United States, it further exposes the holes within its systems, some of which have left women — especially women of color, especially mothers — with additional struggles to navigate.

These issues have kept the Equal Rights Amendment (ERA) in the conversation. First proposed in 1923, the amendment aims to include women in the United States Constitution; currently, there is nothing written in the historic document that calls for equality based on sex, preventing women and men from legally sharing equal rights. In January 2020, Virginia became the 38th state to ratify the ERA, and the following month the House of Representatives voted to remove the time limit on its decision to ratify the amendment. The Senate’s decision is still pending.

While no single law can secure anyone from the impact of a pandemic, having the ERA in place is a crucial longterm step.

“A huge, important part of the Equal Rights Amendment is that it’s able to lift women’s status in our society,” said Bettina Hager, D.C. director of the ERA Coalition and Fund for Women’s Equality. “If we did have a more equal society, I think there would be different laws around domestic violence, and there would hopefully be laws around healthcare and childcare that would help women.”

Before the pandemic, families were already trying to navigate the childcare system to find high-quality yet affordable care, while juggling school with work demands. Now for some, it’s become a nearly impossible situation. Jessica Mason, senior policy analyst for the National Partnership for Women and Families, recently said the effect on many of her coworkers has exceeded the stress of the virus itself: “Many are looking after their children and acting as home-school teachers while working full time, and others are caring for older relatives and family members who need extra support during this time.”

Mason added, “It has really driven home all the work that we’ve been dedicated to for so long around the impossibility of managing work and family and caregiving without really supportive policies.”

It’s been especially difficult for women, considering that they comprise a large portion of essential workers throughout the pandemic, including 78% of health care workers, according to The New York Times. They also represent the majority of employees who were among the first to be cut, such as retail and housekeeping.

For too many women, these conflicts are nothing new. Once having children, women historically have been pushed out of the workforce, and for those who remain, many are only able to hold a part-time job. That has taken a toll on women’s income over time, Mason continued, resulting in less savings. And those part-time jobs are often lower quality and less likely to include benefits like paid family leave, paid sick leave or health insurance. Over the last several decades, the United States has made “glacial but measurable steps toward gender equality in some parts of the economy,” she explained, “With men taking more of an interest in equally dividing the caregiving work.” Women still shoulder the bulk of it, however, and with the economy edging toward “reopening” while school and childcare remain in flux, the country is at risk of losing at least a generation of progress for equality.

“One of the data signals that has been most disturbing to me was this spring, Mason continued. “For the first time in almost 40 years, we saw the percentage of adult women who are in the labor force drop below 50%. Geez, we already know that this has pushed people out of the workforce, but the only question is: Is that going to be long term or is it going to be temporary?”

Her uncertainty is universal. In New York City, where one of the Department of Labor’s approaches for reopening schools is to have students in the classroom on alternate days, author Deb Perlman concludes: “In the COVID economy, you’re only allowed a kid OR a job.”

The National Partnership for Women and Families has been deep in the fight for national paid family leave and paid sick days for many years, beginning with its role in enacting the Family and Medical Leave Act in1993. The original purpose of paid family leave was to allow people to take time off from work due to a medical condition, to care for ill or injured family members, or to give birth. Now childcare has become a necessary factor to consider as well.

“Previously we had not put childcare in that bucket because we, like so many people, had never anticipated a world where someone would need potentially weeks and weeks and weeks of time over the course of a year away from their jobs to do childcare,” Mason said. “We’re all adjusting on the fly as we deal with the situation.”

For assistance today, Mason recommends looking into the The Families First Coronavirus Response Act, emergency legislation enacted in March that offers workers two weeks of paid sick days. But it has significant, problematic gaps that disproportionately affect women, and women of color in particular, since it allows employers to exclude healthcare workers and first responders.

“It’s egregious,” she said. “Think of women nurses or women home health aides who are providing that essential care. Those are the last people you want to have going to work sick. So many of them are also parents.”

Mason speculates that while the COVID-19 crisis further exposes society’s gender and racial disparities, it also draws new awareness to those who haven’t paid mind to these gaps; the way women and people of color are pushed into lower paying jobs with fewer protections and fewer rights; the importance of transforming unpaid care work into paid caregiving; and how essential teachers, healthcare workers and grocery store workers are supported in the workplace.

The mission to ratify the ERA too, has been around for almost 100 years, yet is now returning to the forefront of the political conversation.

“It resonates with this new level of conversation that has just burst across intersectional conversation about the Black Lives Matter movement and the importance of racial equity in our economy, in our political system and in our justice system,” Mason said. “It does seem to me that there is an incredible appetite among a large, large part of the public to finally create that society and political system and economy that really reflects the best of our values.”

If true, women’s equality could be next on the docket. As Jenkins said, simply yet staunchly, “The Equal Rights Amendment would be a major force in recognizing our rights.”

The Sy Syms Journalistic Excellence program at Women’s eNews was launched in 2014 with support from the Sy Syms Foundation. The fellowship provides support and development opportunities for editorial interns in the pursuit of journalistic excellence.

“For a democracy to flourish all voices must be heard.” says Marcy Syms, a founding Trustee and President of the Sy Syms Foundation. “Through its investigative reporting Women’s eNews gets at the essence of good journalism. The Sy Syms Foundation is proud of this collaboration to support today’s newest women journalists.”

As part of its mission to create social change for women and girls through investigative reporting, Women’s eNews helps foster, train, and support the career development of new journalists with a focus on social justice and women’s rights.