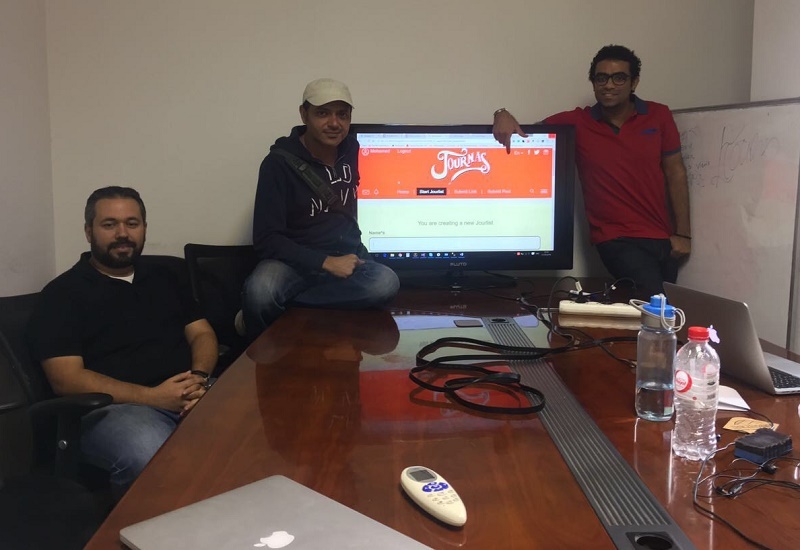 Discredited news pieces and hoax science articles circulate throughout the web, and Arabic versions are not immune.

So in came Journas, which is Reddit-like platform where users can either post material from anywhere or generate their own original content on which others can comment, reshare, review or rate.

Created by long time friends and ex-DHL employees Tamim Heikal and Ahmed Dwaik, Journas began as an archiving tool for Arabic newspapers, magazines and research papers to make it easier for speakers to locate online news in their language.

But the high cost of maintaining large servers, data entry and archiving in order to take people digital in a newspaper-reliant country like Egypt, meant they had to change the business model early on. They shifted to a Reddit-like platform that allows their 200,000 registered users to curate and share material  in what is called a ‘Jourlist’, an interest-based thread where users can read, comment on, share and rate articles.

Singleclic cofounder Tamer Badr joined as CTO and the trio launched the beta version of Journas in September 2015.

No paying for popularity

Revenue was coming from outside advertising on the site and paid content but they didn’t spend a penny on their own marketing. Despite this, the site quickly gained speed, reaching almost one million monthly visits within the first six months.

Some of their Jourlists became very popular, such as Darwish Post (an independant news curating list), 365 days of Pasta (a list of innovative ways to cook and eat pasta every day) and pop science’s Scitopia.

“We are completely self funded till now but when we started we didn’t care, we wanted to create a platform that allowed writers, curators and reading enthusiasts to find a safe space to gather around content and not political or religious affiliations,” Haikal, the CEO, told Wamda.

“We had no idea we would get as much registered users, visitors and traffic without spending a dime on marketing and SEO and this made us believe more in the potential powers of a social media based hub revolving around content.”

A bit of everything

Dwaik, the COO, said the users pushed them to add a blogging section because they felt Journas had the potential of becoming a one stop shop for both the creation of original work and curation of digital material.

“They were thirsty for a hub that allows them to create their own content and share others’ content in a safe space that truly permits them to showcase their talent and knowledge around like-minded people,” he said.

Badr said it was difficult to find enriching Arabic content about topics such as pop science, technology and digital trends, that were also relevant to the Middle Eastern demographic.

Arabic speakers make up about 4.5 percent of world’s population but Arabic digital content is only about 1 percent of the entire world’s online content.

But internet penetration is 49.6 percent in Egypt and 60.5 percent in Saudi Arabia, and social media and entertainment sites are among the most popular.

“No one has a complete friends’ list on Facebook that share his/her exact interests, people add each other on Facebook because they are related or they work together or any other reason, the focal point is the relationship not the actual interest,” Dwaik explained. “In Journas, the focal point where everything revolves is a particular interest or topic which allows strangers to meet and discuss things around the content shared and nothing else.”

Heikal said people didn’t visit Journas “to be loved for your looks or social posse”, but to talk about the material people had shared.

The more the merrier

Mohamed Gamal, founder of Arabic online publishing platform Kotobna, said creating more platforms for Arabic content was essential because of the low supply of quality Arabic content and the popularity of hoaxes and scams, which made Journas a step in the right direction.

“There is a demand for Arabic content and Journas is catering to this with user generated supply instead of users wasting their time and energy using social media sharing that kind of niche product to other users who probably aren’t interested,” Gamal said.

Gamal also predicts digital Arabic content to increase drastically in the upcoming years if hubs like Journas balance both quality and quantity but with focus on increasing interactivity features to increase engagement and appreciation for truly enlightening content.