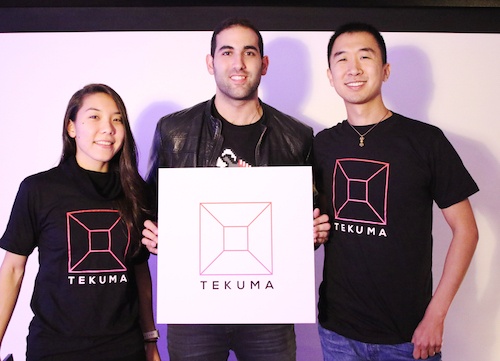 While art has proven to reduce stress, increase creativity and encourage expression of opinion, too often homes and offices are surrounded by blank white walls.

Original art, for much of today’s world, is perceived as unattainable.

But in 2015, Boston-based Tekuma promised to unleash the potential of physical spaces. Founded by three MIT architecture and real estate development graduates, the startup turns spaces into interactive galleries, and property owners into art curators.

Art to people by the people

Tekuma aggregates artwork on an online platform from a wide variety of global artists. It offers real estate property owners the chance to turn their spaces into more interesting ones through artwork. The startup curates relevant art for the space, displays the art of the walls of the home, apartment or office, and through a QR code and link placed next to the art, it also tells more about the artist and the price of the piece. It offers residents a chance to learn more about the artwork, potentially interact with the artist, or purchase the art by using their mobile phones.

For the artists, it provides exposure and a chance not only to sell their work but also their story.

“Today if you buy art, you just hang it on the wall and that’s it. The process is over,” cofounder Marwan Aboudib told Wamda.

“What if you can now become the curator of the gallery, where you are representing that artist? You feel like you created a sales channel and exposure for that artist. So if a friend sees a work of art that he likes, he can either buy it, see other works by that artist, or chat with the artist,” he said.

Artist and university student Martin Elliott uploaded around 15 pieces of art before spending his summer travelling across South America. Although away from his home base of Boston, Massachusetts, he was receiving mobile alerts and notifications on where his art was being displayed and who was buying his paintings. By the end of the summer, he had sold five small prints and made $144.

“It’s a nice reward for putting art in people’s places, especially places that may be filled with art, but may not be filled with stories,” Elliot said. “There may be some art that was bought to fill blank spaces on the wall. But if you substitute that with some real stories, [it takes] art to a domestic and democratized space. Selling is a huge added bonus, I was down to do it for free."

Most recently Tekuma partnered with Compass Furnished Apartments which offers short-term housing to companies and individuals. The property will house 51 micro galleries and 51 artists, located in a prime building in downtown Boston. Another recent deal will bring 40 artworks to another apartment building in Boston and that will house 10 artists.

In total the startup has paid out $15,000 to artists. They host 560 artists and have distributed close to 700 pieces of artwork.

Tekuma charges property owners a setup fee based on the number of artworks it provides. They also charge an annual fee for rotation of new art, if owners are interested. A percentage from every piece of art sold off the wall also goes to Tekuma.

Tekuma was born in 2015 out a desire for more recognition for student work. When no one showed up to Aboudib's MIT architecture degree final presentation on redefining city landscapes, he got to thinking about how he and his fellow graduates could monetize all the models, drawings, and art they were obliged to produce throughout their degrees.

Hopeful that people would be interested in the student material, Aboudib and his friends held exhibitions across the MIT campus of student work. The reception was positive until they were shut down after the third exhibition by the school administration for operating without permission.

The exhibition artwork, along with the QR codes of the art, were placed in buildings' study rooms. With that, they unintentionally turned 20 boring, white-walled study rooms into unique spaces. Of the 20 pieces distributed across the rooms, seven were sold.

Aboudib and his team then turned to the most accessible treasure chest of real estate spaces: Airbnb. They messaged 10 hosts about their idea of turning their spaces into galleries. Obliged to answer within 24 hours, eight said yes.

Nearly one year later, those eight hosts continue to have Tekuma art on their walls. Around 100 Airbnb spaces have also been transformed into Tekuma galleries, Aboudib said.

Aboudib later leased two apartments, one populated by Tekuma pieces and the other left as is. Their A/B testing lasted two months before it was clear that the apartment with the gallery had significantly higher ratings. They continued to lease the two apartments for 18 months and in total made over $200,000 in revenue.

Competition is low for Tekuma. Tekuma is entering a space of modern interior design that supports local artists’ work, while also offering an unlikely sales point for the art. It’s hard to find a company that stands at such an intersection of storytelling, technology, art and real estate.

“Our competitors are who we believe will be our partners and allies,” said Aboudib, referring to interior designers and galleries.

The team has officially begun preparations for their fundraising round and are hoping to close by November.

They also recently signed partnerships with digital photography and art curator giants, 1X and Curioos, allowing them access to thousands of artworks from across the world. Remaining true to Tekuma’s origins, they have also partnered with a new company called Super Architects that represent thesis work of students.