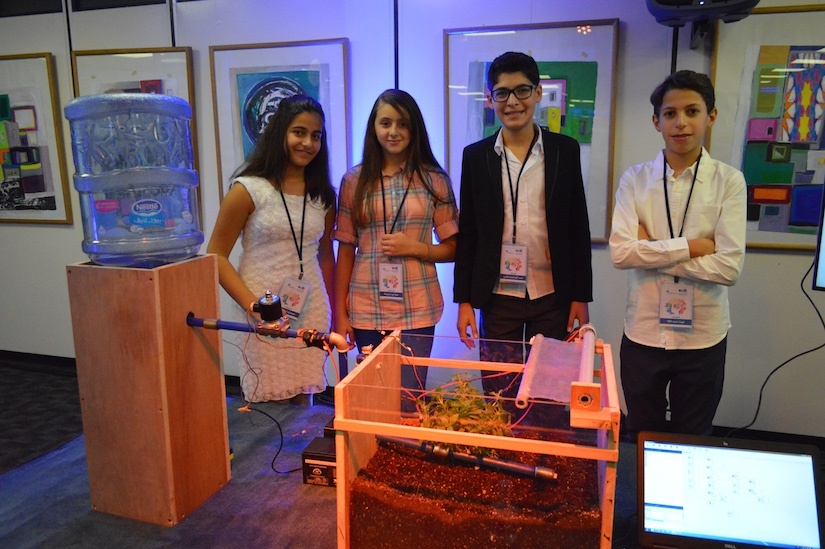 The six inventions at the Little Innovator’s Lab exhibition in Amman on Sunday could have come from any of the university incubators in the region: there was a solution to cleaning skyscraper windows and a smart irrigation system.

Another invention centered about social good: a smart tent for refugees that operates on renewable energy and is equipped with water bumpers to keep rainwater from getting inside the tent.

The inventions were developed by children who participated in an academic program organized by Abdel Hameed Shoman Foundation and in partnership with the Palestine-based Young Scientists Club.

The program aimed to provide 10- to 13-year-old children with weekly workshops on reinforcing critical and innovative thinking, as well as enhance their abilities for in depth research and analysis.

"In order to get more inventions, we need to develop the researchers’ minds since their childhood… The use of technology, science, electricity and electronics encouraged children to love learning,” said Valentina Qussisiya, CEO of Abdel Hameed Shoman Foundation.

“Our way of thinking changed, our scope of thinking is now much wider. I didn’t know anything about electricity before I joined, but now I know a lot,” said participant Hala Hdeib.

The inventions highlighted the children’s technical skills, but the program hopes to position these skills within a wider context of critical thinking.

“We teach [children] that searching for an answer is much more important than the answer itself,” said Young Scientists’ Club founder Waleed Deeb.

In order to prepare the youth for future professions that do not yet exist, teaching the children how to learn is critical, he said. “What stands unmoved by time is the skill of learning.”

Organizers are will launch the second edition of the program with another group of children in Amman and in al-Karak, the latter in partnership with Al-Karak Innovation Club.

In addition to this program, the Abdel Hameed Shoman Foundation supports innovation through several activities across Jordan, such as partnering with the Ministry of Education to quality Jordanian teams to participate in the annual Intel International Science and Engineering Fair.

Other startups and initiatives that work on incorporating technology into children’s learning in Jordan include Eureka Academy, Hello World Kids, Coding Circle, and International Robotics Academy.