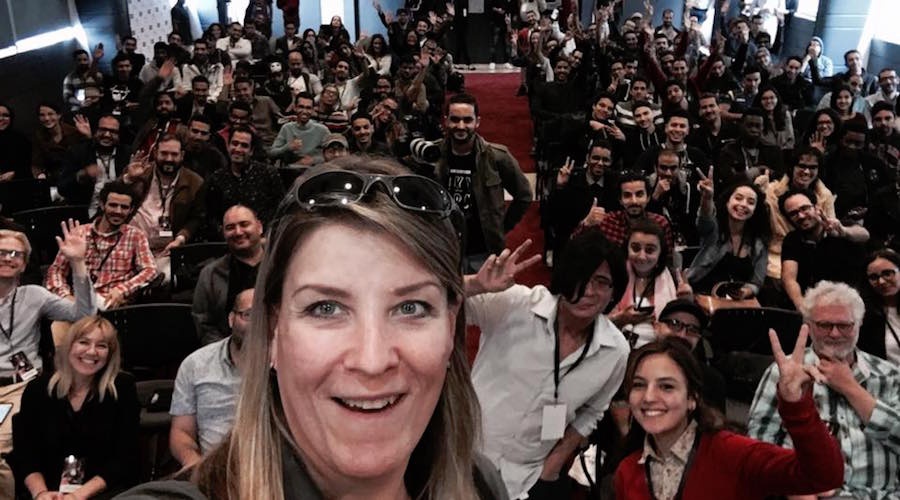 Whether you’re a professional, student or passionate gamer in Maghreb, your presence was critical at the first edition of the Maghreb Game Conference in the Casablanca Technopark last weekend.

The 400 participants in the conference had access to a range of keynotes, panels and workshops, where 20 international experts discussed technical and overall business related themes.

The international expertise was what attracted Khalil, a computer science student and mobile game developer, to this conference.

“I met a lot of people, and received feedback from many professionals,” he said. “Having access to such a network is very important to achieve progress and to find the best practices.”

Other young professionals shared his opinion. Like Khalil, many attendees were aiming to build a local and international network, receive feedback and meet with potential partners and contributors.

At the exhibition, startups and studio booths transformed the alleys of Technopark into a real time video game hall.

“One of [the company’s] objectives is to better understand the Moroccan market and present our games to the MENA region,” said Mohamed Koubaa, cofounder of Placeholder. “We also suggested partnerships with some of the exhibitors in order to share our user base and increase the downloads of our apps.”

Gaming, a growing industry in Maghreb

The history of video gaming in North Africa goes back to the creation of Ubisoft in Casablanca in 1998.

After Ubisoft closed its Casablanca studio this June, the ecosystem turned a new chapter. “Independent studios now have the opportunity to write their own destiny,” said Yassine Arif, president of MGD and founder of TheWallGames.

According to the specialists, this sector’s potential in undeniable.

Sho Sato, chief analyst at Japanese agency Media Create that specializes in video game marketing, highlighted the growth potential of this market characterized by “fast mobile penetration, a youth base and an open mentality to international culture.”

Michel Ancel, the French video games designer that created the famous series Rayman and worked with Ubisoft’s teams in Casablanca said that Moroccan developers work on an international level whether they are programmers or artists.

Brie Code, the lead developer behind the international success Assassin’s Creed, agreed. “I met extremely talented people with interesting styles I rarely run into. Having visited Tunisia, I think we have here two complementary scenes that can create something big,” she said.

According to Arif, a very competent minority exists. However, building an ecosystem requires much more.

One of the challenges lies in education. “Gaming must be considered a real job, with specialized schools,” said Michel Ancel.

Business challenges are also available everywhere. Developers have difficulties in creating products and business models adapted to the region where gamers play a lot, but do not pay.

“The limited number of online payment methods and the lack of funding organizations willing to fund a risky sector slows down the development of startups in the region,” said Riad Mohamed Aboulethar, general manager of MGD. However, he believes that the main obstacle is the lack of entrepreneurial spirit.

“The spirit of collaboration and professionalism must be encouraged, and the giving up culture, and fear of failure must be fought. The rest will follow,” he said.

Everyone knows that collaboration is key to overcoming these challenges.

The three organizing game developer associations in the Maghreb knew how to capitalize on their experiences and benefit from this new regional sharing and co-creation platform.

“We want to benefit from the domino effect! If one of us makes it, the other will. It’s the law of attraction,” Arif said.

There must be collaboration with corporations as well, he added.

The support he received from Technopark and its director Omar Balafrej was crucial, Arif explains.

A collaborative entrepreneurship model is indispensable to accelerate the development of innovative industries in the region.