Natakallam gives Syrian refugees both a voice and an income 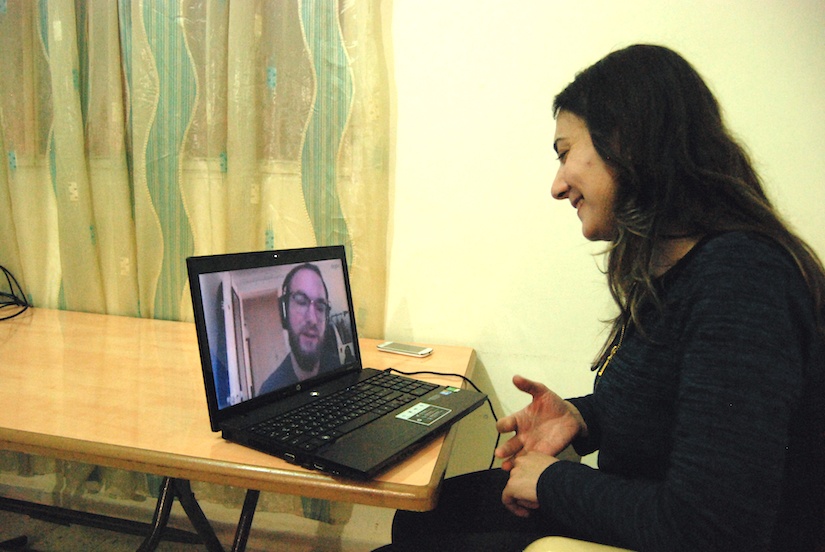 Several times this summer, Andrew Haas sat at his laptop at 9 am in his Seattle apartment dialing the same number on Skype.

On the other side of the world, his teacher, Feras Chbara, a Syrian refugee living in Bonn, Germany would be waiting for his call. For around an hour, the two would chat in Arabic, a language Haas has been studying for the past six years.

The transatlantic conversation is thanks to a web startup titled Natakallam, or ‘we speak’ in Arabic. Launched in 2015, Natakallam is a platform that matches Arabic language learners with displaced Syrians, who are also fluent Arabic speakers, for language practice over Skype.

“As a Lebanese-American, I wanted to sharpen my own Arabic. But when I decided to take language classes, I noticed unaffordable prices for students. In New York, that could [mean] $60 per hour,” said Aline Sara, founder and CEO of Natakallam.

She'd just returned from a trip to Jordan where her business product was awarded $20,000 at the MIT EF Pan Arab Innovate for Refugees Competition.

“Before the war, Damascus used to be a hub for Arabic learners, as Syrians, unlike Lebanese, do not mix English and French into their Arabic,” Sara said. In 2015, Sara and her business partner, Reza Rahnema, pitched their language learning idea to a World Bank competition and launched the pilot website.

“When we launched a small pilot, many users signed up when we weren’t ready yet. [It was] something we were not expecting,” she said.

To date, around 35 Syrian conversation partners and over 880 individuals in more than 50 countries, from Brazil to Armenia, have engaged in Natakallam sessions.

The one-on-one conversations allows for more awareness on refugee conditions and helps individuals understand how to better welcome refugees in their respective countries through sustainable solutions.

“These sessions have been an opportunity for me to develop friendships globally, but also to keep myself busy and giving a purpose to my life while waiting for my work permit in Germany. It also gives me time to learn the local language and not fall into a black market system,” said Chbara, who used to work as a high school English teacher in Damascus.

The startup is housed through New York’s Columbia University Startup Lab, and is supported by Arcenciel, a Beirut-based NGO. The NGO helps with the recruitment of refugees through an online application form on Natakallam’s website. They then interview qualified candidates, train them on teaching methods and on how to use the platform.

At their NYC headquarters, Natakallam’s staff handles payment to refugees through a combination of online money transfers and coordination with Arcenciel. They also match users based on Arabic level, interest and schedules, and ensure quality control through a feedback system.

The startup’s business model is between a for profit business and an NGO.

The cost for a one hour conversation on Skype is $15. Of that amount, $10 is given directly to Syrian tutors and the rest toward operational costs, such as  maintaining the website.

By tutoring more than one student, some refugee teachers manage to make salaries of up to $1500 a month, over 50 percent more than the average in Lebanon, Turkey, or Egypt’s minimum wage.

Over four million people have fled Syria since 2011, with millions more internally displaced, according to the UN refugee agency. Hundreds of thousands have been killed as a result of the war.

“We thought of language because it’s a valuable skill regardless of what refugees have studied. Most of our teachers were lawyers, engineers, architects or writers before the [Syrian] war,” Sara said.

In countries like Lebanon, where Syrians are limited to work in fields such as garbage collection or construction, or in EU countries, where Syrians struggle for months before getting their work permit, these sessions are empowering.

“On a psycho-social level, this gives refugees the chance to help individuals around the world, as opposed to constantly being the ones helped or victimized,” Sara said.

“It is modern penpall-ing at a reasonable cost and in service of finding ways around the geopolitical conditions that divide us,” said Patricia Kubala, a 39-year-old Natakallam user based in Cairo. She practices her Arabic with Ghoson, a former Syrian activist and philosophy teacher from Aleppo who fled the war to Paris in early 2015.

For language learners it’s an opportunity to practice conversational Arabic, as the majority of  language courses focus only on classical Arabic.

For this reason some universities are now working with Natakallam to give students a chance to complement Modern Standard Arabic classes with more colloquial practice. So far, Swarthmore College, George Washington University and Tufts University have created small funds to help cover costs of the Skype sessions for their students.

Syrian refugees are only the tip of the iceberg. There are many displaced Arabic native speakers who are struggling to find work permits and a stable income, and whose dialects appeal to colloquial learners.

Natakallam hopes to include Palestinian and Iraqi refugees in the near future, and is also looking into launching its services in Farsi with Iranian political refugees.