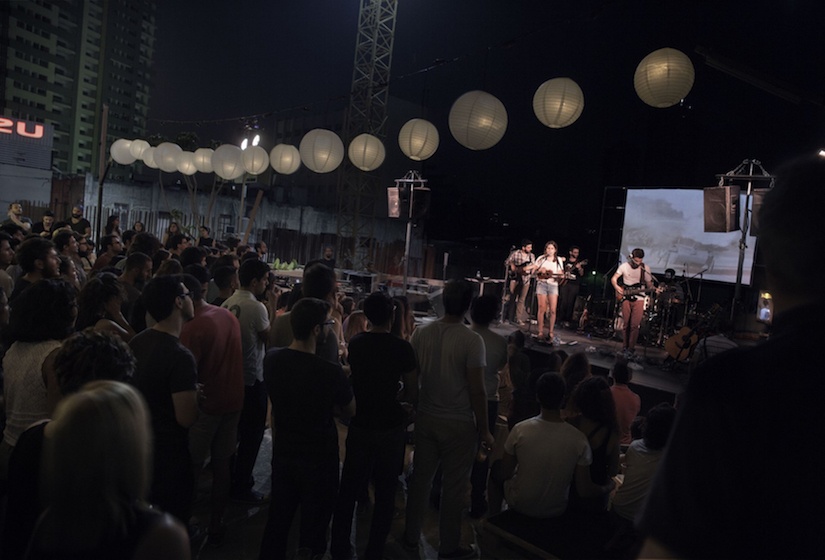 Anthony Semaan is an unspoken hero for Lebanon’s music scene.

His startup, Beirut Jam Sessions, has done more for local musicians than any of the country’s annual large scale music festivals.

Founded in 2012 by Semaan, Jessica Naime and Talia Souki, Beirut Jam Sessions has brought dozens of international artists, including Joss Stone and The Wanton Bishops, to Lebanon to perform and play alongside local artists. They represent 10 local bands, including Postcards, Karim Khneisser, and Ibrahim Maalouf, and have organized more than 100 shows abroad for Lebanese artists.

But being a concert organizer and manager of local bands is secondary to the their Youtube channel, where in video after video the startup offers filmed improvised ‘jam sessions’ between international and local artists in unconventional locations across Lebanon.

It was where the real magic happened, said Semaan.

One of their latest videos is of European artist Roscius who they filmed playing in a run-down garage in Beirut’s Armenian suburb Bourj Hammoud. Another, below, was at a boxing ring just outside Beirut and brought together European duo Heymoonshaker, Syrian-Filipino rapper Chyno and Beirut’s FZ from the Fareeq El Atrash band.

The Youtube channel has garnered over 1.5 million views from the region and abroad.

“With all the generic crap passing for music these days, it’s always a joy to discover artists that do it for the love of music. And it’s an even greater one to discover fellow Lebanese enriching our culture in their diversity and musical boldness,” Joey Ayoub said in his blog post about the group.

While Beirut Jam Sessions in unique in Lebanon, its backstory is a standard one for most entrepreneurs: cushy job, missing drive.

“I wanted to create something that when I woke up in the morning I was are proud of,” Semaan said. Until 2012, he worked at a telecommunication job in Madrid but had been writing down ideas for his own music venture for many years. “[In order to succeed] I had to cut the hand that feeds me and remove myself from any income I was receiving.”

Their first concert was with in June 2012 when they brought Australian singer-songwriter Emilie Gassin to Beirut for a performance. Around 450 people showed up. Since then, they’ve grown to work with renowned global artists including Joss Stone, who recorded a session performing Khneisser’s song ‘Walahi’.

But bringing international artists to Lebanon comes with a few caveats.

First, convincing them to come.

“Everytime I bring an artists, I have to justify [Lebanon’s] security and sanitary situation,” Semaan said. “I had three artists cancel due to a bomb in Lebanon. Three others cancelled due to the garbage crisis. They said yes to coming, checked the news, and cancelled.”

Second, getting an artist visa at General Security.

For Semaan, who does not have the financial backing or fame for a wasta with General Security, his international artists need to obtain an artist visa to legally perform across Lebanon.

The legal logistics require him to stand in line at a General Security post for over six hours the day prior to an artist arriving, then they must take the artist to General Security before they leave.

They sometimes stand in line with the artist for over five hours to complete the legal process, side by side with some sketchy characters seeking the same type of visa. In Lebanon, an artist visa is usually used for women who either knowingly, or more often, unknowingly, are entering the country for prostitution.

In addition to wait time, they also have to pay $350 for each artist visa, an amount that sometimes exceeds the artist’s plane ticket costs.

“It's a bit embarrassing sometimes and a bit shameful,” Semaan said. He sometimes arrives at the General Security office at 6am to secure a good place in line.

“The bigger festivals are all exempt from this because the financial power, and then do all their concerts in UNESCO world heritage sites so they are even more exempt from this. They pay a visa fee but they don't need to go through the hell we go through.”

Eager to compensate for his country’s nonsensical bureaucracy, lack of security and stench of garbage that engulfes the poorly planned and over-build city infrastructure, Semaan also gives his artists tourist tours of Lebanon.

In addition to taking them out to Beirut’s relentless nightlife, Beirut Jam Sessions takes their artists to visit tourist attractions like Byblos, Jeita grotto, and other landmarks in the tiny Mediterranean country.

“I know every corner of these places more than the ministry of tourism now. I’m also promoting the country through our videos, and what the artists say about the country when they leave,” he said.

And finally, there’s the challenge of finding sponsors. Beirut Jam Sessions has only one consistent sponsor: Red Bull.

Many potential sponsors in Lebanon and the region are hesistant to support a local concert that may not yield thousands of audience members, or a Youtube channel whose videos don’t get a millions of views.

At the moment, the music venture makes its money from concerts and as a booking agent for local artists. While their business model may not be the best, it’s hard to deny their drive is on pitch perfect.

“This is my dream job, I created it for myself and I’m not gonna let it go without it being as successful as it can be, and as helpful as it can be to local artists,” Semaan said.